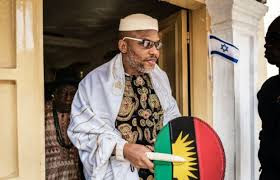 Nnamdi Kanu, the leader of the Indigenous People of Biafra, IPOB said he’s not afraid of being re-arrested by the Federal government saying it would hasten the realization of the Republic of Biafra dream.

Kanu who spoke in his home in afaraukwun ibeku Umahia yesterday said,

‘If you arrest me, Biafra will come even quicker than we anticipate. I am not afraid of being arrested. I have been there before and if need be, I will also be there again. I will be very happy if they re-arrest me. If we are hoping for 90% compliance with the boycott of Anambra State Governorship election, my arrest will make the compliance 100%’.

He alson said, ‘but why will they re-arrest me again and nobody is going to arrest Tanko Yakassai or Ango Abdulahi because of what they have been saying all the while?

Is it because they are Fulani? They own Nigeria? They are immuned to arrest? Is arrest only meant for Biafrans and not for Fulani?

Who will arrest Lawal Daura of DSS for flouting court order to release Bright Chimezie Isinwa of IPOB? They the Fulanis say whatever they want and like and still go free and nobody will hold them accountable because they own Nigeria,

“I will go anywhere I want to go. I don’t even listen to threats. They motivate me rather than bringing my spirit down. What they say I cannot do is what I love doing.

When the time comes for me to go lagos, I will go to Lagos. I also have friends with connections in Lagos, Fani Kayode is also my frind and he is also in Lagos.

If I try to visit my friend in Yoruba land, then I must go to Lagos”.