A man suspected to be a motorcycle thief was caught and sets ablaze by an angry mob at Dabi village, Kwali area council last Sunday.

Ground Witnesses said the incident which took place at about 4:00 pm. in the community on the Abuja-Lokoja expressway.

The mob pursued the MOTORCYCLE thief from Gwagwalada to Dabi after he was seen in possession a motorcycle that does not belong to him. The suspect abandoned the machine and fled but he was apprehended by the mob and was beaten to pulp before they burnt him alive.

most of the people used dangerous objects to stab him all over his body, while others throw big stones at him until he became unconscious.
They now brought a tyre and set him ablaze. 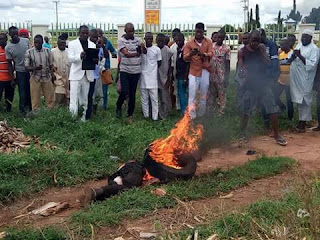 Tell Your Friends About This
Tags:cult, scammers, thieves